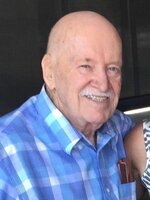 A survivor of cancer, diabetes, and strokes; Walter finally surrendered to medical complications on May 1 (1938-2020). He passed at home with his wife Mary Sue and daughter Jennifer at his side. The pandemic might have limited the gathering of family around him at death, but his life was a pleasantly crowded affair. He was preceded in death by his father Walter, Sr., his mother Catherine, brother John (Cheryl) and his son Robert (Patti). He is survived by his wife Mary Sue, sister Catherine (James), son Michael (Shannon), daughter Rebecca (Nick), daughter Jennifer (Jeremy), son Charley, and son Benjamin (Mary Bridget). His grandchildren bounced around him too: Alec, Ian, Connor, Aoife, Esme, Marshall, Griffin, Earl, Louisa, Benjamin, Owen, and Oliver. He was born in Bullpit, IL but spent his formative years in Springfield, IL. He graduated from Cathedral High School in 1956. 1960 was a big year for him: he earned a bachelor in science in electrical engineering from the University of Notre Dame that May; he married his wife of 60 years, Mary Sue Kaminky in November. They moved to Minnesota in 1962 where he spent the rest of his life. His career was about helping people navigate life. He worked at Honeywell for over 30 years as an electrical engineer. He worked on the Gemini and Apollo Space Programs, helping to develop the lunar lander systems. He also was a part of the team that developed the laser inertial navigation system (LINS) that keeps airplanes level with the curve of the earth. The original LINS device is now in the Smithsonian Air and Space Museum in Washington D.C. His 60-year marriage with Mary Sue is best summed up this way: “In love, and earnest, / [they] place[d] their hands together / Holding onto each other / To keep from floating away / On the lightness of pure happiness.” He assured his loved ones that there would always be a way: a way out, a way back, a way to change, a way to laugh, a way to heal. We remember that now. We like to think that he is now watching us now like he took in his sailing races, and all of our sporting events and artistic performances: a slight grin, blue eyes shining, and a full heart. A small viewing was held on May 3; a memorial service will be held later this year.