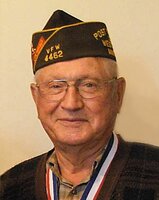 Francis “Bud” Trost - devoted father and grandfather, passed away peacefully on Monday, December 28, 2020 at his home surrounded by his loving family. Bud was born in St. Paul, MN on August 10, 1924 to Harry and Josephine (Lothenbach) Trost. He entered God’s Family through the sacrament of Holy Baptism on September 21, 1924 at Salem Lutheran Church, West St. Paul, MN. Bud was a farmer and gardener. When he was a boy, his family tilled the soil of an 85 acre farm in West St. Paul with a horse and plowshare, milked 23 cows by hand and delivered milk to West St. Paul customers in a horse-drawn wagon. Stories abound through the years as a young farmhand. Later on as WSP turned more commercial, Bud and Dorothy purchased a farm near Kenyon, MN where he still enjoyed tilling the soil and the harvesting and planting of corn and soybeans through this past harvest season. Gardening, grape growing and making homemade wine were just a few of his long list of hobbies. Bud was a marine and a patriot. Joining the service meant leaving the farm and WSP for the first time in 1944. He eventually became part of the first group of Marines into Tokyo Bay, Japan. He was honorably discharged in 1946. He was a proud long-time member of the local VFW Post 4462 in WSP and for a time serving as commander. He flew his red, white and blue daily and was proud to be an American. Bud was a policeman and a protector. When he finally made his way back home in 1946, the cows were waiting for him but he had other plans. Rather than return to the farm, he joined the WSP Police Department. His first day of work was Christmas Eve, 1946. When he started the department consisted of 5 officers who shared one car. He eventually became Chief of Police serving in that position from 1981 until his retirement in 1985 finishing up a 38 year career. Bud was a family man. Bud met Dorothy Heuer of Eagan and the two were married at Trinity Lone Oak Lutheran Church in Eagan. They went on to have three sons: Greg(May), Jeff(Jan), and Tim(Joyce). He built a house for his growing family at 1947 South Robert Street. After retiring, they moved to their new home in Vermillion Township near Hastings, MN. Among many trips across America, he especially enjoyed many years of Labor Day weekend Minnesota fishing trips with his growing family currently consisting of 11 grandchildren and 16 great-grandchildren. Bud was a positive role-model. Bud experienced and observed many things throughout his lifetime and used stories to share his vast wealth of knowledge. He understood the importance of hard work, spending time with family and savoring the little things in life. He enjoyed harvesting a dried crop of soybeans, taking a Sunday drive down country roads, sitting in a still quiet morning watching the birds with his dog Minnie, a good Chinese buffet and some homemade apple pie. He proudly attended many of the grandkids’ events and with a smile and twinkle in his eye was quick to give a word of advice to those who needed it. Most importantly, Bud was a Christian. Bud made his faith in God and attending church a priority in his life. He always bowed his head in prayer before meals and his Bible and Portals of Prayer devotional books were well read and worn. He was a proud Lutheran who passed on his Christian values and morals to his family. A Celebration of Life Service will be held at Hope Lutheran Church, 16898 Michael Avenue, Hastings, MN on Saturday, January 30 at 11am. There will be a visitation prior to the service from 9:30am to 10:30am. To comply with MN State gathering and social distancing requirements, guests please pre-register with the church office 651-480-2273. Memorials preferred to Hope Lutheran Church.